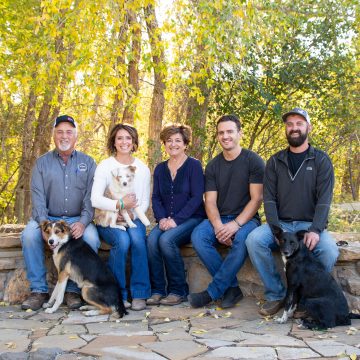 Our story dates back to the early 1900’s when Steve’s mother Georgia and her husband at the time, Steve Simos immigrated from Kaloskopi, Greece, a small mountain village in north central Greece. Northwest Colorado became home for Georgia and Steve, since the steep, mountain terrain reminded them of their homeland. With determination, hard work and grit Steve and Georgia began sheep ranching. The two continued ranching together until Steve’s passing in 1948. Georgia continued the ranching operation for a couple of years until it proved too difficult. In 1950, she leased out the land and returned to her village in Greece. There she reconnected with a childhood friend, George Raftopoulos. In December, 1950 the two were married and returned to America by ocean liner. Through perserverance, George and Georgia continued ranching and began to grow the operation. George and Georgia had two sons, John and Steve. After graduating high school, Steve continued on to the University of Colorado where he received an Accounting degree before returning to the ranch. John also returned to the ranch, after receiving his degree in veterinary medicine. Over the years, John and Steve expanded Raftopoulos Ranches to include 10,000 head of breeding ewes and 2,800 head of breeding cows. In 2012, the cattle and sheep operations were seperated, and Steve, Toni, Jorgiea, Andrew and Zacharias created Two Bar Sheep Co.

Toni also grew up in the sheep ranching business. Her father, Andrew (Andy) was born in Price, Utah in 1929 in a tent high in the forest. Andy’s dad worked in the coal mines of Price, Utah as did many other immigrants. His family eventually found their way to Northwest Colorado as well and began to raise sheep. In 1954 Andy returned to his mother’s island of Limnos, Greece and met his future bride, Argryo (Argie). Within one month, the two were married and returned to America. Andy and Argie continued to grow their sheep operation while having three daughters, Stella, Toni and Bia.

Steve and Toni were married in 1988 and had three children, Jorgiea, Andrew and Zacharias. All three children continued on to college after graduating high school and have now returned to work the family business. Two Bar Sheep Co., continues to honor our roots by humanely and sustainably raising Rambouillet-Targhee ewes crossed with Rambouillet and Suffolk rams. Our commercial herd has been developed over 80 years and spans northwest of Craig, with rangeland spreading into Wyoming. Growth has also included adding commercial cattle and goat herds. We continue our family tradition with the same determination and tenacity of those before us in order to provide a high quality product for our consumers.